1st Prize - Open project competition with jury intervention for the hiring of drafting services for the projects of four new places in the superblocks program and technical assistance to the construction management, in the Eixample district of the city of Barcelona .

Eixample is the district of the city with the highest population density considering the total area, with about 355 inhabitants per hectare, but it is also the most lacking in urban green with only 1.85m2 per inhabitant. Of the 421 bloks of the Eixample, 154 contain free spaces. The battle for the new green spaces began to conquer for public use some of these interior spaces, designed by Ildefonso Cerdà and distorted by decades of speculation. Currently there are more than 70 interior gardens on the blocks, each one unique and different from the others.

Now the implantation of the 'superilles' will manage to go from the interior of blocks to the superilla, thanks to 21 new green spaces and 21 new squares at their crossroads.

Only a few months ago, Barcelona woke up from the spring confinement greener than ever. Many citizens discovered a different city, kinder, renaturalized, colonized spontaneously by wild species as a result of the decrease in pollution and the poor maintenance of some parks, gardens and flower beds. Blackbirds, robins, caps, herons and parrots entertained us with their songs. The Citizen Observatory of Urban Butterflies recorded between the last months of May and June an increase of almost 75% in butterflies observed in the city and a 30% increase in the number of species. Then some questions arose: is it possible to enjoy wild spaces in the city? Can we create neighborhood through the urban green cure? Can citizens promote the renaturalization of the city and increase the biodiversity it hosts?

That is why the Municipal Omnibus survey, carried out between June 2 and 17, included for the first time a series of questions that explore the possibility of Barcelonans participating in this task. 82.5% of the people interviewed (a percentage that rises to 92.8% among the youngest) believed that "the public and the City Council have to collaborate in the care of public green spaces". 47% would be willing to "participate on time in activities to cure green spaces and biodiversity in the city" and 13.8% say they would do so on a regular basis. 15.2% would be interested in "taking a course on gardening, horticulture and urban nature" and 25.5% also showed interest.

In this context, the chosen location is located at the intersection of Enric Granados and Consejo de Ciento streets. A walk through Enric Granados from the Plaza del Doctor * Letamendi to the premises of the Seminary and the University of Barcelona allows us * to enjoy some 200 plant species. A uniqueness and a botanical heritage, unknown in other places in the Eixample.

Our proposal (Jardin ILLA) is more than a square, or a square with vegetation, it is a naturalistic neighborhood garden conceived to recover the native green, inviting the members of the community to experiment, * enjoy, know and take care of its nature. The garden is ecologically maintained to provide maximum benefit to wildlife and act as a management laboratory for new green spaces in Barcelona.

In this neighborhood garden, located in an area with another concentration of leisure and restoration that threatens to resent the life of the neighborhood, a richer and more porous soil, a wide palette of Mediterranean species and an affective infrastructure, collaborate to stop time and promote the stay and the game. In accordance with this main idea, the main criteria of the project are described below.

The green design has taken into account the magnitude of the existing canopy. For this reason, the line of action has been to preserve the existing trees, which will be changed depending on their deterioration, and to plant new herbaceous and shrubs. The species have been selected considering the current and future climate (as a result of the effects of climate change), their functionality in the urban environment as a garden for everyone, and the space and available soil, in any case the enrichment of the area's biodiversity prevailing.

The proposal integrates and responds to the necessary requirements for the correct operation of the city (vehicles with origin or destination, services, loading and unloading, garbage containers, emergency services, for raising and lowering vehicles, access to vehicles). motorized vehicles for maintenance services, emergencies, cleaning, lighting, taxis, and loading and unloading of any kind. The morphology of the designed public space guarantees a reduction in the speed of wheeled mobility, which will be 10km/h maximum, at the same time that it makes it possible for pedestrians, bicycles and personal mobility vehicles, unlike motorized vehicles, to continue their journey continuously, without deviating from the street.

In accordance with what is established in the Barcelona Climate Plan, which sets the objective of "closing the water cycle and optimizing the use of groundwater, promoting the use of rainwater and reclaimed water and favoring the infiltration of water into the subsoil", the The project improves the permeability of the sun and thus makes it possible to collect rainwater temporarily, attenuating its flow and facilitating the absorption of runoff water that comes from areas with a higher degree of impermeability. It also decreases the volume of water that reaches the conventional sanitation network and, therefore, the volume of water that reaches the wastewater treatment stations. 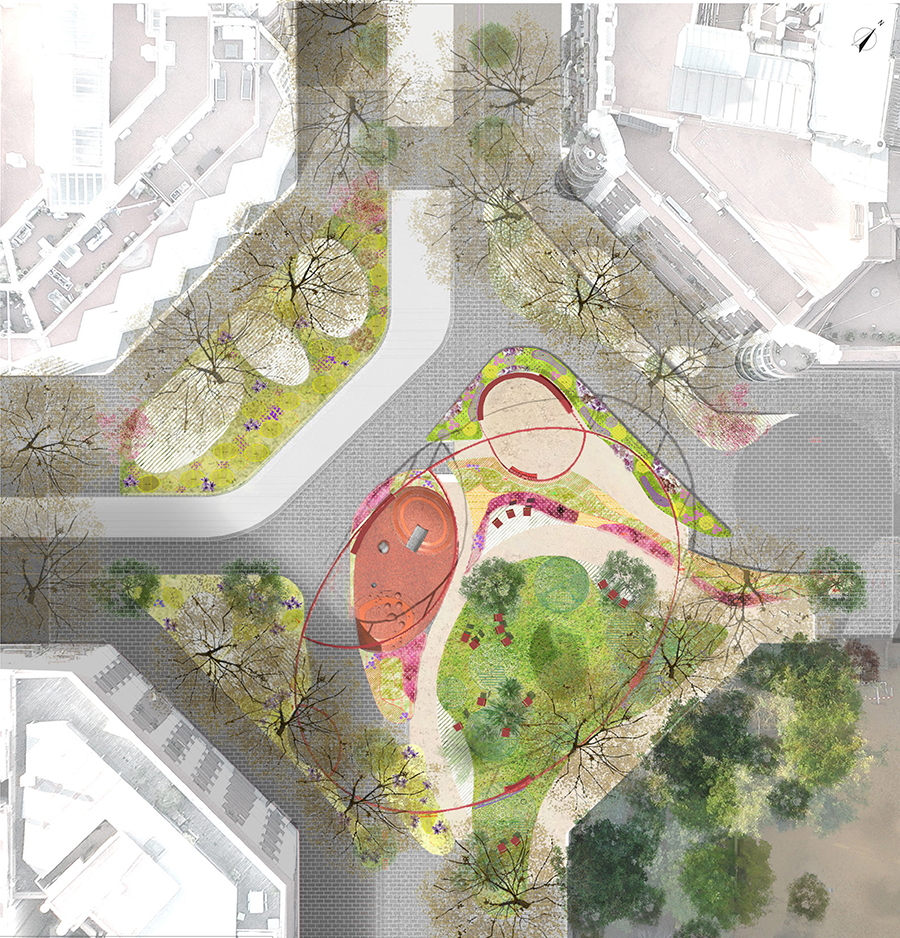